Wine: Gift of the Gods

Grape seeds and wine sediment have been found in archaeological sites dating back to 1200 BC in Italy, but it was the Romans who added the concept of ​​wine to the country’s collective subconscious. The Roman poet Horace once said that “no poem ever was written by a water drinker”. The Romans considered the drink to be a gift from the gods – particularly from Bacchus, to whom celebrations and feasts were dedicated, with lots of wine included. 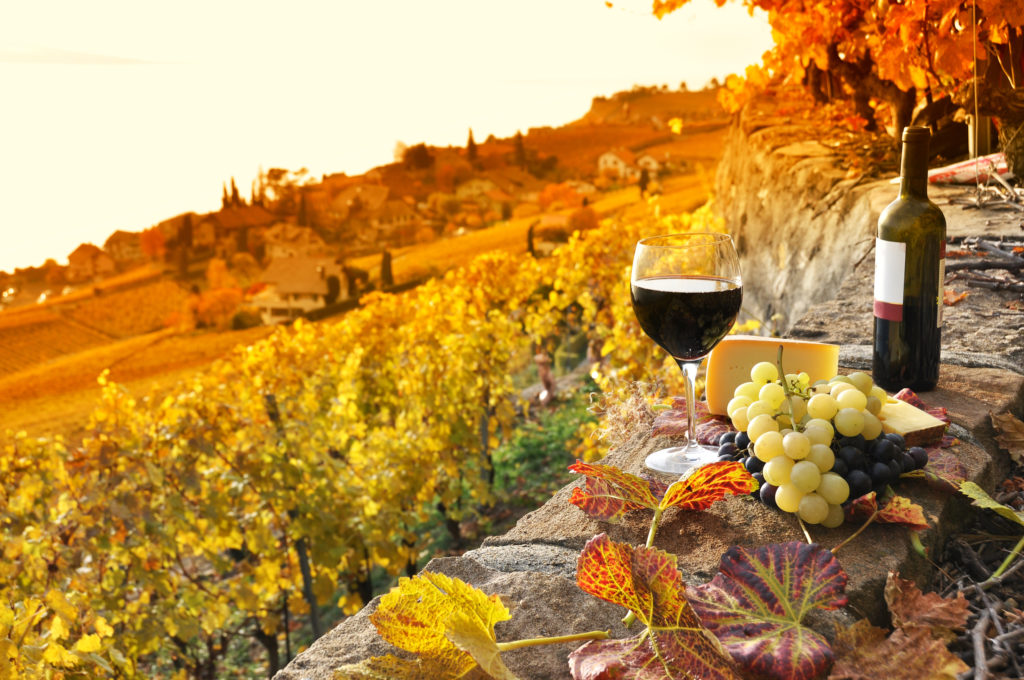 The several statues and paintings of the God Bacchus, scattered throughout Italy, reveal the significance of wine in the Roman Empire. The influence of the Romans on Italian viticulture started with the expansion of the empire to the islands of Sicily and Sardinia. Even though other parts of the territory had Greek and Etruscan wine influences, the Romans, established in Italian territories, developed several techniques that are still used today, not only in the country, but in the world: maturation and aging, oak barrel care and choice of cultivated grape varieties depending on the territory in which they are better developed – all these are part of the legacy left by the Roman Empire to Italy, being passed on to the other wine regions of the world, throughout the centuries.

As we speak, Italy is the world’s largest exporter of wine and the second largest producer. There are about 18.000 original names of noble or peasant lands; basically, we can’t find a place in Italy with no vineyards. And for those who think that the Italian wines are all the same, you couldn’t be more wrong! Each region has a singular way of producing wine, influenced by the climate, local temperature and the historical inheritances of that location.

With steep hills, the region stands out with red grapes, but some white varieties are thoroughly found in wine production. In Piedmont, one always has to talk about Nebbiolo, due to the quality they offer to the reds. This variety appears mildly in the drink, with an intense aroma and a strong acidity. For instance, the traditional Barolo and Barbaresco are true icons of Italian viticulture produced with this grape.

Secondly, the Barbera grape keeps a prominent place among wine connoisseurs. Unlike Nebbiolo, this grape allows modern and easy wines to be straightforwardly consumed, while still young.The Dolcetto is yet another grape found in Piedmont, having a softness and sometimes dryness among its traits. The Bonarda and Vespolina are also very important grapes in the region. The two are alike due to the number of blends produced, particularly with Nebbiolo.The grape Moscato is a vast family of grapes with different sizes, colors and shapes, but all alike due to a strong aroma.

The variety found in Piedmont is the White Moscato, with a fruity aroma, which, despite being a white grape, can produce rosé wines.The Asti Spumante method is also prominent in Piedmont, due to the production of sparkling wines. It’s produced in the commune of Asti and it’s aromatic, mildly sweet and has a low alcohol content.

Tuscany has one of the world’s best-known wines: The Chianti.The Chianti can have different shapes and stiles. The Sangiovese grape is accountable for Chianti’s success. While most producers create a pure Sangiovese, some also do blends for this wine. The Chianti that stands out most is the Classic one, produced in the region between Florence and Siena. Along with the Chianti, there is another important wine in Tuscany: the Brunello di Montalcino. This wine is darker and can be stored for long periods of time. It’s seen as an icon among Tuscan wines. According to the rules established in Brunello’s DOCG, and because it’s considered a reserve wine, the drink must be kept for two years in oak barrel, four months in bottle and has to have at least 12% alcohol content.

Trentino – Alto Adige is found in Italy’s northernmost tip and has a direct connection with the Germans. A distinction should be established between the Trento region and the Alto Adige.

The Alto Adige region has a more southern culture, with more cosmopolitan wines and relies on international castes. The production of white wines in the region has a prominent spot and high quality.

To better illustrate this, fifteen cooperatives in the region produce 70% of the wine, some of which abide by high standards of private property.

In Trento, most of its labels are sold in the neighboring country and, for that reason, they are written in German. The Trentino region is conquering a spotlight in white wine production, but the local population keeps the reds alive nevertheless. These are Trento’s main white grapes: the Nosiola, which produces a fruity, dry and bitter-ending wine; the Pinot Bianco and the Tramier, which produce great dry white wines. Another Trento specialty is the Moscato Rose, a Muscat with a fragrant rose aroma and high levels of natural alcohol. This combination, albeit strange at first, has a unique taste and it possibly has a Sicilian origin. The region’s main red grapes are Shiava, Lagrein and Teroldego. We can say that they all share a soft start and an outstanding end.

The Lombardy wines are less known than the Tuscan and Piedmonts but have a very significant presence in the Italian wine market. It also grows Nebbiolo grapes and has elegant wines ready to be consumed. The Oltrepò Pavese sub-region is one of Lombardy’s most productive and profitable areas but remains barely known. In the meantime, the Valtellina sub-region is notorious for the production of red wines with the Nebbiolo grape and is popular in Switzerland, due to the country’s proximity. Lombardy also produces a renowned sparkling wine, regarded by many as the country’s best: the Franciacorta. It’s a wine with DOCG and produced with grapes grown in the hills of Brescia.

We can say that Verona, near Lake Garda, is considered the wine capital, having the highest number of DOCs in Soave, Valpolicella and Bardolino vineyards, which can only be found in this region.This region welcomes Italy’s biggest wine event, in April: the Vinitaly Verona is so important in winemaking that it claims to be Italy’s international capital of wine. Conegliano is another important region in Veneto, in terms of winemaking technology. Together, Verona and Congliano have a tradition in the use of some grapes, namely: Garganera, Corvina de Valpocella and Prosceco. Some less traditional areas, like Berici and Euganeli, rely on international castes: Pinot Noir, Cabernet, Sauvignon and others, for instance.

Umbria is accountable for the majority of wines produced in Italy. Its location is outstanding – found between Tuscany, Marche and Lazio.

The famous Orvieto, a golden DOC, with a subtle and sweet flavor.

Right next, in terms of importance, comes the Rubesco, a noble red produced in Torgiano, near Perugia. In addition to its exquisite taste, this variety has one of the best prices among Italian Wines.

The most important grapes in Umbria are the Sagrantino and the Sangiovese, full-bodied raw materials that last a long time in the mouth.

When the subject is Italian wines, Sicily can be deemed the region that has changed the most in recent years. The fortified Marsala was the only wine known in the region, but barely consumed. The remainder of the production was almost inedible.

Thanks to a regional growth program conducted in Europe, the Italian wine industry grew quickly. Sicily was one of the most favored regions with this reform and invested in its own wine production.

Red wines are generally quite red, strong and similar to Port wines. The outstanding grapes in Puglia are: the Primitivo, with an outstanding flavor in its wines; and Negroamaro, with medium-sized tannins and a dark color. Uva di Troia is also developing in local wines, medium bodied and highly acid. Puglia produces high-quality white and red wines. The white and dry wines, located in the north of Taranto, have well-established DOCs. They were originally designated as vermouth-based wines, but, due to modern production techniques, they are drunk along with fish. Meanwhile, this area’s most famous DOC is Castel Del Monte, with its energetic rosé.

The Valle d’Aosta region, located between France and Italy, is Italy’s smallest and least populated area. Although it only has an eighth of its neighbor Piedmont, the steep Mont Blanc mountains help the local viticulture. Valle d’Aosta has 18 types of wines, produced in two different languages ​​– Italian and French.

One of the major differences of the Friuli-Venezia Giulia region is the classification of wines by grape variety and not by its sub-regions. The major wine producing area is Grave Del Friuli, a DOC that goes from the eastern border of Veneto to Udine. The region’s best wineries are located in the Gorizia hills.The coastal vineyards give preference to red wines, while those located on the hills prefer whites. The grapes cultivated in Friuli range from Merlot, Pinot Bianco or Girgio, to Sauvignon Blanc and Fruilano.

White wines are also important in the Lazio region. The region encompasses the capital of Italy, Rome, a city with an extensive wine list. ​Lazio’s main area is Frascati, with a DOC produced from the Malvasia grape, which has low acidity and lends singular characteristics to the wine. Lazio, in the north and south of Rome, has volcanic soils, perfect for growing grapes. The region’s wines were not exported in the past, but thanks to pasteurization processes and treatments, this reality is now changing.

Naples, Campania, has winegrowing characteristics: a volcanic soil, the influence of the sea and the height of its mountains. Two great names come from this region: the red Anglianico and the white Greco. Falanghina and Fiano are white grapes from Campania, which should be mentioned for their performance in wine production. Some quality wines are produced in the region of Ravello, in the Sorrento peninsula; and, in Irpinia, in the north of Avellino. In recent years, Campania’s wineries are taking full advantage of Campania’s high-quality soil.